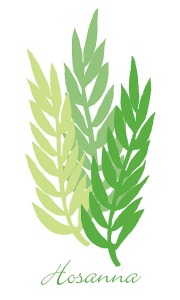 When Romeo first meets Juliet in Shakespeare’s famous play, they have a witty little exchange about lips and palms. Romeo “accidentally” brushes his hand against Juliet’s palm and, pretending he offended her, offers to kiss it and make it better. Juliet, being coy, says that no reparation of damages is required, since “palm to palm is holy palmer’s kiss.” Besides being clever wordplay, Juliet introduces us to the theme of today’s Gospel lesson. A “holy palmer” is a pilgrim, someone who follows after Jesus, walking in his footsteps and praising him. Romeo, angling for a kiss, suggests, “Then let lips do what hands do, they pray.”

I’ve been thinking about what lips do and what hands do when holy palmers pray. Can we pray with just our lips? Or are we only “holy palmers” if our palms (hands) as well as our palms (branches) are in motion? What can we learn about palms and lips and prayers from today’s Gospel lesson?

First of all, we must set the scene: the city of Jerusalem is teeming with people celebrating the Passover festival. Faithful Jewish people from all over have gathered there to remember how God saved the Israelites from the bondage to Pharoah in ancient Egypt. Many of those gathered believed that God would once again sweep down to save them from their oppressors—this time the Roman Empire. Some people were convinced that Jesus was the new Moses who would lead them from slavery to freedom, so they turned out in droves to greet him as he rode into the city for what turned out to be his last week alive.

As Jesus arrived, they greeted him as they did a conquering military hero—waving palms branches and shouting “Hosanna! Save us!” (which is what Hosanna means in Hebrew). A new revolutionary leader was not only expected, but was overdue. By the time Jesus rode into Jerusalem on the donkey, there had been 32 political riots in five years. Can you even imagine the tension any time a large crowd of people got together for anything? Jerusalem ready to blow at the ignition of a single spark. Of course, many people hoped Jesus was that spark. They waved their palm branches as one might wave a political sign.

Now imagine how the Romans perceived what was going on. They knew that Passover commemorated a Jewish story of an uprising that involved God drowning the foreign army in the sea. So how would they have heard the people shouting that the new Messiah, the appointed one of God, was here to rescue the people? This was the incendiary climate as Jesus rode in through the gates of the city.

Palm Sunday might have felt like a political rally to some people, but it was also a religious affair. Some of the holy palmers had studied the ancient prophets, or listened to the contemporary prophets like John the Baptist, and were hoping for religious revival. They were hoping the Messiah would set to right all the ways that the priests and rabbis had gone astray and would call to task anyone who failed to keep the holy law in all its perfection. Some holy palmers had heard Jesus preach and believed he was God’s son. They cried Hosanna with the hope that finally God’s people would be cleansed and purified, and that sinners (which is to say, those who did not keep the law as they did) would be properly punished.

No doubt scattered through the crowd of holy palmers were sightseers, thrill-seekers, people just caught up in the mood of the day. Perhaps they had heard of or even witnessed Jesus healing the blind or turning water into wine. Maybe they’d heard about Jesus’ most recent miracle—raising to life a dead man!—and they were curious. What might this Hebrew Houdini do next? Probably there were some skeptics in the crowd, just hoping to be on hand when something interesting happened, so they could tell their friends they were there.

These and many others were among the holy palmers that day, yelling Hosanna to Jesus, each of them having differing ideas about how it would be manifest. My guess is that very few of them got what they were expecting or hoping for. We all know that the impressions made on the red carpet are at least as important as the events that go on after the grand entrance. How could they fail to be surprised when Jesus rode in not on a fiery steed or in a golden chariot, but on a jackass? What sort of king does that?

They must have hoped the reason this odd entrance would be made clear once he gave his campaign speech. But—at least according to Mark’s record of the events of Palm Sunday—Jesus did no preaching or prophesying. OK, perhaps they figured, Jesus must be planning to let his actions speak for him. Everything would be clear once he formed his army and led it up the stairs of Pontius Pilate’s palace to destroy the Roman officials. It would all make sense when he reinstituted the centrality of the Temple as the hub of the universe—or at least set the stage for his latest, greatest magic trick. They continued to holler at him to save them, and followed him with anticipation.

They were right that Jesus was going to let his actions speak for him. They just weren’t prepared for what his lips and palms said. When Jesus entered Jerusalem, he did what conquering leaders always did—headed straight for the Temple, the religious, social, and political center of the Jewish world. But unlike other military commanders, he did not immediately erect a statue of himself and require financial gifts in exchange for his protection. He did not form an army. He did not initiate a new religious order. As Messiahs go, he was a complete and total dud. The people, who had been what our first lesson today called “prisoners of hope” were crushed. Jesus wasn’t the one who was going to save the world. He had no power, no might, provoked no fear and awe. They couldn’t bear it. Their disappointment is what caused the priests and revolutionaries to turn from crying Hosanna to crying “Crucify him!” practically overnight.

And we? Can we bear the fact that Jesus doesn’t sweep into the church, the government, the social structures of our world to throw out the people with whom we disagree? How do we endure the possibility that he may, in fact, open the doors even wider? Can we live with a king who does not crush our military opponents underfoot, but restores to wholeness the very ones we strike at with our swords? Can we bear to uncurl our fists, open our palms, knowing that such vulnerability might get us hurt?

If Jesus were to converse with Romeo and Juliet about what lips do and hands do, I bet he’d attest that both are involved in prayer. Jesus’ whole life was a prayer. His lips and palms—every single thing he said or did—exemplified what kind of king he was. Jesus’ life proclaimed that the poor and the weak and the children and the marginalized needed to be treated with the greatest reverence. His ministries brought forgiveness and hope rather than terror and submission to the fearful. That’s the king we claim we worship and follow. Do we announce this with our lips only, or do our palms express the same truth?

Jesus prayed by serving. Later this week we will recall his serving a meal like a waiter, and wiping his disciples’ dirty feet like a shoeshine boy. We’ll see his palms clasped together in agony as he wrestles with his call in the Garden of Gethsemane. We’ll watch those palms reach out with compassion to heal a soldier who comes to arrest him. And then those palms will tremble and shake on Good Friday as nails are pounded into them. Our king does not raise a sword against those who dare to harm him—instead he invites God to forgive them. He invites sinners to approach the throne of God boldly. Jesus lips and palms are always open on behalf of those who need compassion.

Can we follow such a king? How can we, when we are so often disappointed in God’s hidden ways? What do we do when all we can see is the cross, and not the power of God to raise the dead to new life? On this Palm Sunday we shout, “Hosanna” and claim to Christ as our King, but can we hang onto God’s promises when there seems to be no evidence of God’s power or concern? Sometimes being a holy palmer will look and feel as if we are following a loser, not a winner.

Holy Palmers, that’s why we need each other’s support on this journey, following our unusual king. We need encouragement to live as citizens of God’s kingdom as we limp along in our broken world. God’s kingdom is a community where we not only feed the hungry, but challenge any system that keeps them hungry by not paying a livable wage. God’s kingdom is filled with people who not only pray for healing, but also call for access to curative and preventative healthcare for all people. God’s kingdom elevates those who are being left behind by a program that says no child will be, shelters those who are no longer able to afford a home, and treasures all who are abused, forgotten or neglected in any way. In God’s kingdom those who have no voice, no power, and no other recourse know that they are safe. Among the people of God they will always find allies, always be greeted hospitably, always be seen as somebody.

And that is a lot to ask. It’s one thing to wear a cross; it’s another to carry one. It is not easy to live as kingdom people. It could get a person arrested, tried, convicted, maybe even killed. Certainly it opens us up to ridicule. But how can we call ourselves followers of the king if we don’t follow him? We must help each other trust that, however counter-cultural it is, following Jesus is an authentic, radical expression of love for all creation.

So Holy Palmers, as we strive to fulfill God’s dream, let’s continue to pray, “Hosanna! Save us!” with the sure knowledge that our request has already been granted. We walk together strengthened by Christ’s own body and blood, sustained and refreshed by the Holy Spirit. We know that nothing can separate us from the love of God—neither height, nor depth, nor angels, nor rulers, nor trials in the present, nor any trial to come can ever separate us from the love of God that is ours in Christ Jesus. And so into God’s open palms we commend our spirits, our lips, our palms, all that we have and all that we are, trusting the infinite mercy of our humble king, Jesus the Christ.